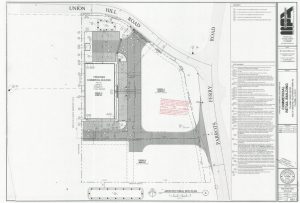 Columbia, CA — Plans have been submitted to the Tuolumne County Community Development Department for a Dollar General Store in the Columbia area.

It is to be located at the future Stone Mill Center which will be constructed at the intersection of Highway 49 and Parrotts Ferry Road.

We reported in late 2015 that the Tuolumne County Planning Commission denied the proposed construction of a new 9,100 sq. ft. building to house a Dollar General nearby, just down the street from the Stone Mill Center property, on Parrotts Ferry Road. Over 50 people spoke at the five-hour session voicing concerns ranging from increased traffic to not fitting in along the historic corridor. The final vote was 5-2 in opposition of the project. The decision was appealed to the Tuolumne County Board of Supervisors, and two months later the board upheld the commission’s vote, denying the project 3-0. Two former supervisors, Karl Rodefer and John Gray, declined to vote that day, citing conflicts of interest.

The new Dollar General Store proposed would be part of a project already approved by the county (Stone Mill Center), so it does not need planning commission approval at this time, as Clarke Broadcasting confirmed with Community Development Director Quincy Yaley.

When Stone Mill Center was first approved in 2017, it was anticipated that an Adventist Health Sonora Prompt Care would anchor the 16,000 square ft. center. However, Adventist Health scrapped the plan as the Stone Mill Center was delayed by a lengthy legal challenge. We reported in April of 2018 that the developer was later victorious in the lawsuit filed against it by Citizens For Responsible Growth.