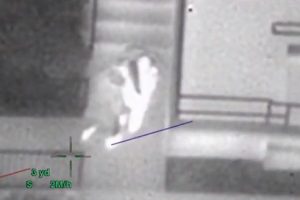 San Andreas, CA – The Calaveras County Sheriff’s Office has released graphic videos and 911 calls of the May 6th deadly shooting that involved several deputies and the suspect firing their weapons.

The incident began at the Sierra Inn Motel in San Andreas called in as domestic violence call, between a man and woman with a report of a gun being pointed at her head, as reported here. When deputies arrived the suspect Mark  Aitulagi Lavea, was gone. While interviewing the victim in the 500 block of Lewis Avenue near the Diamond Place Apartment Complex, sheriff’s officials say Lavea ambushed a deputy and shot him in the upper torso. They say he then grabbed an elderly woman and held her hostage with a gun to her back while deputies tried to negotiate her release.

The sheriff’s video release has several calls that can be heard including one where Lavea calls to dispatch and is connected with a deputy at the scene. He asks repeatedly to talk to his wife. There are also videos from different angles including one using an aerial thermal imagining camera as well as deputy body-cam video of the incident. The show the elderly woman either falling or being pushed by Lavea, he then runs and dives behind a cement barrier, as shots are exchanged. Bullets can be seen ricocheting off metal walkway handrails and cement. Sheriff’s officials report that the elderly woman was hit by debris from gunfire, but did not detail where her injuries were, as earlier reported here. Also, Lavea was wounded in the chest, stomach, and leg. Lavea was lying on his stomach and after removing his gun that was underneath him, they began rendering CPR. Clarke Broadcasting warns that the video in the image box is graphic. Sheriff’s spokesperson Sgt. Greg Stark relays, “The video is intended to give our community a better understanding and additional information about the events that occurred.” The case remains under investigation.