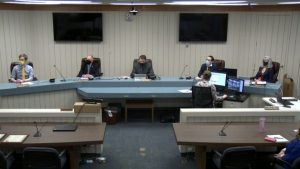 Sonora, CA — The board of supervisors in Tuolumne County heard an update about proposed changes that could notably impact local development projects.

We first reported in March that the State Board of Forestry has drafted new proposed regulations that would require landowners to improve all “substandard roads” before a development project can move forward in an area deemed “high fire hazard.” Most all of Tuolumne County falls under the category. The fear is that the move would price many people out of doing development projects. District Three Supervisor Anaiah Kirk also addressed the issue in his myMotherLode.com blog earlier this week.

Additional actions were taken on an April 23 Board of Forestry meeting to further move along the proposal, including a truncated public comment period.

District Five Supervisor Jaron Brandon notes, “The fact that they truncated the public comment period to just two weeks…that can only be taken as hostile to all stakeholder input, including counties, and the public.”

District Four Supervisor Kathleen Haff adds, “I would like to see a whole campaign that brings our community in and gets them involved as well…because they are not going like what happens if they (state) ramrod this down our throats.”

Staff was directed draft an additional letter voicing the county’s concerns and return it for board review prior to a June 22 deadline.

To read the entire 31 page report that county staff members prepared for the supervisors this week, click here.