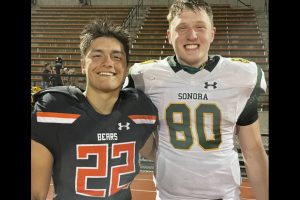 A much-anticipated night for football fans in Tuolumne county has passed, and it did not disappoint. The Summerville Bears hosted the Sonora Wildcats at Thorstead field. Coming into the match-up, the Bears were 1-2 while the Wildcats sat at 1-0. Before the game, Bear’s kicker Connor Cowley launched the spectators into the game with his electric guitar rendition of the National Anthem.

In the Bear’s first possession, RB Josh Caldera returned the kickoff for twenty yards. The Bears injured QB Jaden Brocchini went out on the field but led Summerville to a three and out. The Wildcats were able to capitalize on a shortened field and scored early in the first quarter on a throw from QB Bradley Curnow to wide receiver Gabriel Milbourn.

Less than a minute after their first score, the Wildcats were able to provide a repeat performance on a nearly identical play from Curnow to Milbourn to put the Wildcats into an early two-score lead. As the Wildcats went up large early, the Bears clawed their way to a touchdown through 20 yards rushing by RB Kai Elkins, 9 reception yards by WR Braylon Leveroos, and a 20-yard reception into the end zone for WR Jorden Cribbs. Leveroos was able to get into the endzone for the two-point conversion with 1:42 left in the first quarter, bringing the score to 14-8 where it remained until the end of the first half thanks to an immaculate defense from both teams.

The third quarter of the game was marked with a strong defensive showing from both teams and a battle of field position with neither team scoring.

In the fourth quarter, a Bear’s penalty gave the Wildcats the field position they needed for Curnow to connect with Milbourn for a third touchdown. Bringing the Wildcats to a 20-8 lead.  After the touchdown by Milbourn, Summerville had to score quickly to have a chance. A few short passes and two runs apiece by Leveroos and Caldera put the Bears near the 40-yard line of their own territory. Caldera received a hand-off from Brocchini and he barreled downfield for 60 yards but fumbled at the 2-yard line. Sonora got the fumble recovery which turned the ball over but put the Wildcats near their own goal line. The Wildcats tried pushing the ball up the middle, but the running back dropped the ball on the way through. Caldera fell onto the ball and gained possession while in the endzone which led to a touchdown. The Wildcats, now up only 20-14, forced Summerville to try and get the ball back quickly.

The Wildcats started with the ball with 8:36 left in the fourth. This possession only led to a punt. The Bears started their final possession with just under four minutes to play. Summerville was able to get a first down but struggled on the next set of downs. On fourth down, Brocchini flipped Leveroos the ball and he threw a 32-yard pass to Cribbs to keep their hopes alive. With only a few yards gained it was another fourth for the Bears. Leveroos took the snap and tried pushing his way through the line but was unable to do so. With 1:30 on the clock and Sonora took a knee to end the game.

“It was a hard-fought battle, and I am proud of my team,” said Milbourn after the game.  “I am also super happy for Summerville, as I know most of them and played with them before.”

Caldera added, “It was one heck of a game!”

Summerville closes out their season, but Sonora will play Calaveras next week.