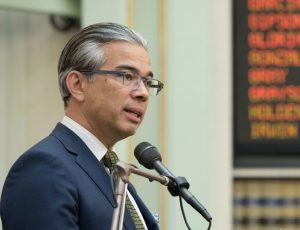 He represents the Alameda and Oakland area in the Assembly.

Assuming he is approved by the legislature, he will replace Xavier Becerra who is now the Federal Health and Human Services Secretary.

Governor Newsom notes that Bonta would become the first Filipino American to serve as AG.

“Rob represents what makes California great, our desire to take on righteous fights and reverse systematic injustices,” said Newsom. “Growing up with parents steeped in social justice movements, Rob has become a national leader in the fight to repair our justice system and defend the rights of every Californian.”

Bonta added, “Now, more than ever, we need leaders in government, and leaders in law enforcement, who will build bridges with communities that have been targeted.”