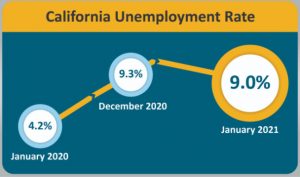 Sacramento, CA – Even with a decrease in California’s jobless rate, the state lost more than 70,000 jobs in January as the coronavirus pandemic lingered on into the new year.

The state rate dipped from 9.3% in December to 9% in January. That drop is attributed to the fact that 36,500 people stopped looking for work amid another round of state-imposed lockdowns, according to Friday’s Employment Development Department (EDD) report. Revised numbers from December and January show the state actually lost 145,300 jobs over those two months, slowing California’s recovery. However, the state has regained about 39% of the more than 2.7 million jobs lost in March and April 2020 when the pandemic took hold.

The Mother Lode recorded no changes from month to month with Tuolumne and Calaveras County rates remaining constant. Tuolumne’s rate held at 9.5%, a half-point higher than the state’s January average, while Calaveras beat both, sticking at 7.3% for the first month of the year.

The biggest job losses were in the leisure and hospitality sector that includes restaurants and hotels, which have been hardest hit by COVID closures. That sector lost 70,600 jobs in January and is down nearly 800,000 jobs since January of last year. Despite that decline, six of California’s 11 industry sectors saw job growth last month. The largest gains were in construction at 31,600 jobs.

The EDD noted that these numbers are based on surveys conducted the week of Jan. 12, when the state was averaging more than 50,000 new COVID-19 cases per day and hospital ICUs were at full capacity in the state-designated Southern California and the San Joaquin Valley regions. Currently, the state is averaging less than 4,000 new cases per day and hospitalizations have declined more than 84%.

Those numbers enabled Gov. Gavin Newsom’s administration to update the state’s Blueprint For a Safer Economy, allowing Tuolumne County to move from the purple, most restrictive, tier to the less prohibitive red tier, as reported here yesterday. It allows for indoor restaurant capacity at 25%, retail at 50% and gyms at 10%. Also, anticipated to open in April are theme parks and fans being allowed back into the stand for Major League Baseball games.

Regarding how the state’s recovery proceeds, economists wager it is up to the impact of state and federal aid. California’s legislature has already approved $14.2 billion in state aid, including $600 payments to those with low- to moderate-incomes, $2.075 billion in grants for small businesses and $6.6 billion for public schools to restart in-person learning. With the signing of the $1.9 trillion federal relief package by President Joe Biden, the state will get more than $150 billion, with almost half of that in the form of $1,400 stimulus checks and expanded unemployment benefits, according to the California Department of Finance.