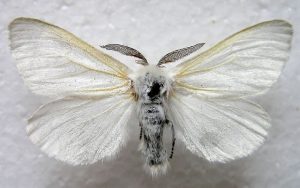 The Associated Press reporters agriculture and forestry experts in California are concerned about a potential infestation of a small white moth that can destroy entire groves of aspen, cottonwood and willow trees, especially in mountainous areas. The white satin moth’s numbers are up 100-fold this year in parts of neighboring Nevada, and no one is sure why.


The AP spoke to Jeff Knight the state entomologist at the Nevada Department of Agriculture. Knight says, “I’ve been doing this 35 years and I was here when the first one was found and I’ve never seen it as an issue before.”It’s probably been held in check by natural predators and parasites out there, so with the infestation in the past year or so, things have gotten out of balance.” “I think everybody is kind of concerned now in this area.”

The positive news is that experts who studied the moths near Lake Tahoe this month found signs their natural predators are making a rebound and should help keep the invaders in check.

Previous outbreaks were reported in Wyoming and Colorado, but the cousin of the gypsy moth flew largely under the radar in California until recently.