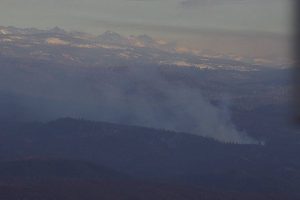 Update at 4:15 p.m.:  The Abernathy Fire that is burning in the Stanislaus National Forest near Yosemite and just west of Camp Mather continues to grow in size but so does its containment.

Forest spokesperson Diana Fredlund updates that the acreage has climbed from 220 to around 373 acres and crews have gained 50 percent containment from 15 percent last night. She tells Clarke Broadcasting that firefighters remained on-site overnight overseeing the flames’ rate of spread. She details, “As of  3 p.m. today, the rate of spread outside the perimeter is minimal and firefighters are making sure the snags and other fuels inside the perimeter are out, which is much of the fire activity at this time.  Where possible, firefighters are allowing the smoldering edges to work as if it were a prescribed fire.”

Update at 4 PM Wednesday: There was minimal growth of the Abernathy Fire today and it is 15 percent contained according to Stanislaus National Forest spokesperson Diana Fredlund. Firefighters continued cleaning up hot spots inside the fire’s perimeter. Their best estimate for the fire today is 220 acres, up from 212 earlier. They currently have three engines, two hand crews, two water tenders, and one dozer. The various personnel working on the fire plan to continue line construction and to burn out pockets of fuel where needed in areas where it is safe to do so. They note dangerous areas include steep, rocky terrain and numerous areas of dead tree snags from the Rim Fire. Since the winds have calmed down they report the fire is spreading at a slow rate of speed and is not expected to grow very much overnight and into tomorrow. The forest service states it will be keeping an eye on the fire until it transitions into a mop-up stage of management.

Original Post at 11 AM: Tuolumne County, CA — The acreage has grown on the Abernathy Fire burning near Yosemite National Park.

The blaze ignited on the Groveland Ranger District of the Stanislaus National Forest, just west of Camp Mather, yesterday morning due to the high wind event. Forest officials update that aircraft infrared mapping overnight puts the acreage at 212 acres. Last night forest officials estimated the fire was 70 acres in size, as reported here.

Additional resources arrived overnight, and suppression efforts continue today. Forest spokesperson Diana Fredlund details, “Firefighters are working to surround the fire with containment lines, and there are still some active flames in a few places. They will continue with an active presence until it is contained, and the interior heat is cooled.”

Fredlund also adds that there is no containment at this time. Currently, there is no threat to the camp or any other structures. The fire is located within the Rim Fire scar.