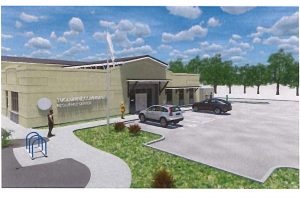 Sonora, CA — The regular Tuesday Tuolumne County Board of Supervisors meeting tomorrow at 9 AM will include a presentation from health officials about the response to COVID-19. Later among the many things for them to review, they will discuss a possible special election related to a parcel tax for fire funding and also make a decision about approving a schedule and plans for the Community Resilience Centers in Tuolumne and Groveland.

Parcel Tax for Fire Funding
The Board of Supervisors will hear a presentation from the newly formed Tuolumne County Fire Department Joint Powers Authority (JPA) about a proposed Parcel Tax for Fire. The JPA notes increasing expectations to respond to thousands of service calls each year and wants to plan to build and staff three new fire stations within ten years. The JPA proposes a special election ballot measure to seek voter approval for a Special Parcel Tax for Fire. The new annual tax is proposed to increase 2% annually. The tax will be a flat rate of $75 per unimproved parcel (no habitable structures) or $150 per parcel with structures. Exemptions will be similar to those for regular property taxes, but all zoned parcels will be taxed.

In December a Tuolumne County Fire Joint Powers Authority was created from the members of the fire departments of County of Tuolumne, City of Sonora, Groveland Community Services District, Columbia Fire Protection District, Jamestown Fire Protection District, and the Tuolumne Fire District. Voters who are not within the jurisdiction of the newly formed JPA will not vote on the tax. The JPA is working toward a special election to be held on June 8, 2021.

According to the JPA, the money will be used for several things, including creating a strategic plan for fire station locations. That plan will detail a modernization of their facilities including planning, building, and staffing three new fire stations within ten years. The money will also be used to decrease the reliance on the General Fund which grew from $348,000 in 2017-18 to over $1.5 million in the 2020-21 fiscal year. The JPA wants to plan a fleet replacement program, including modernizing the current outdated fleet within 10 years and setting aside funds for future replacements. They cite needing to create a replacement plan for required equipment including Self-Contained Breathing Apparatus, Jaws of Life, personal protective and all the other equipment they use.

The JPA states their funding remains unstable due to decreasing property tax and other revenue, more competition for grants, unpredictability in State Fire Reimbursement, increased expenses of personnel and equipment, and the decreased availability and number of volunteers.

If approved the ballot measure would require 2/3 of county voters to vote in favor and then all revenue collected would be placed in a fund set aside only for use for fire services.

Community Resilience Centers (CRC)
The Board of Supervisors will discuss and vote on approving the plans for the Community Resilience Centers. After the 2013 Rim Fire, Tuolumne County was awarded a total of $24,511,125 in federal grant money to build centers in both Groveland and Tuolumne. The Tuolumne County Supervisors approved an agreement to purchase two acres in Tuolumne for the Tuolumne CRC from the Tuolumne Band of Me Wuk Indians as reported here located along Bay Street and Cherry Loop Blvd. The Groveland CRC will be located along Ferretti Road just past Groveland Community Service District Office.

The CRC facilities are approximately 8,775 sq. ft. with a large 200-person conference room that can be divided into two, a small 20 people classroom, four offices, a commercial kitchen and restrooms with showers. They will have generation power and numerous outlets have been designed for the whole building in case of an emergency.
There are nine additional proposed features for the projects including a radio tower structure at each site and audio-visual equipment in the classroom and large meeting rooms, and at the Groveland site a pedestrian bridge or crosswalk and an outdoor restroom building.

The county received nine contractor proposals which were reviewed by a committee and determined to qualify to bid on the project. The engineer’s estimate for the CRCs is $18,257,984 is slightly below the budget for this project. Bids from the nine companies will be due by 2 PM on March 3, 2021 at the Tuolumne Memorial Hall.

The County Administrator’s Office estimates from day the bid is awarded, proposed to be scheduled on March 16, 2021, it will take 14 months to complete the two Community Resilience Centers. The proposed start date for construction is April 2021. More photos of the two CRCs from the architect firm Lionakis are in the image box.

You can find the entire agenda for Tuesday here.