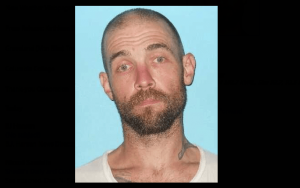 Columbia, CA — The Tuolumne County Sheriff’s Office attempted to pull over the driver of a pickup truck who was driving recklessly in the Big Hill area of Columbia.

It happened at around 8pm yesterday. The sheriff’s office reports that the driver, 39-year-old Matthew Carlile of Sonora, accelerated and led the deputy on a chase along Gunsight Road and Quail Mine Road. The truck got stuck after trying to turn onto Four Wheel Drive due to the angle. The sheriff’s office reports that Carlile then put the truck in reverse and rammed into the patrol vehicle. He again tried to accelerate up Four Wheel Drive, but was unsuccessful. He was ordered from the truck and taken into custody without further incident.

Carlile was arrested for having an outstanding arrest warrant, driving while his license was suspended, reckless driving, possession of drug paraphernalia, felony evasion and assault with a deadly weapon against a peace officer.