Three Pot Grow Busts Worth Over $600,000 In Calaveras County 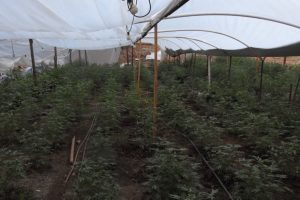 Calaveras County, CA – Three pot grow busts over two days with a value of over $600,000 also netted two arrests, over 85 plants and three guns — one an AR15 rifle.

For a fourth time since 2017, Calaveras County Sheriff’s Office Marijuana Enforcement Unit raided a property in the 4000 block of Esmeralda Road in Murphys and found an illegal marijuana grow. Seized were 555 growing pot plants and 22 pounds of processed marijuana with an estimated value exceeding $403,000, according to sheriffs officials. Unfortunately, no suspects were located at the scene and the investigation is ongoing.

The next day, October 16th, the unit hit two more illegal grows in the San Andreas area. The first one was in the 4700 block of Old Gulch Road where deputies seized 236 growing marijuana plants estimated at over $165,000. Two male adults, Duong Luong, 38, of San Andreas and Pham Vo, 49, of Oakland, were found in tents on the property.  A subsequent search of those tents uncovered two firearms: a handgun with a high capacity magazine and an AR15 style rifle.  Ammunition was also seized. The investigation is ongoing.

That same day, another search was made in the 4400 block of Oak Grove Road in San Andreas. Sheriff’s officials detail that 72 growing marijuana plants with an estimated value exceeding $50,000 were seized at the property. Deputies also uncovered a handgun and located a suspect, Paul Russ Arthurs, 61, of San Andreas. He was cited for possession of marijuana for sale and released. Unit officials relay that evidence was collected at the scene and the investigation is ongoing.

Anyone with information or that suspects an illegal marijuana operation is asked to call the Sheriff’s Office Anonymous Marijuana Tip Line at (209) 754-6870.