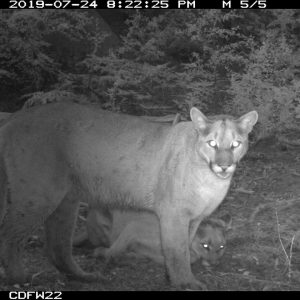 Yosemite, CA — Yosemite officials are releasing some of the initial information uncovered as part of a study underway on mountain lions in the park.

A three-year study was funded last year by the non-profit Yosemite Conservancy. The National Park Service reports that as the wildlife habitat of mountain lions disappears, they increasingly depend on protected areas like Yosemite. In turn, the park’s ecosystem also depends on mountain lions. They control prey populations like deer and influence the movements of predators such as coyotes and bears.

To collect data, a team is using remote cameras, highly trained scat detecting dogs and genetic analysis. The information collected will help scientists identify where mountain lions are living in the park, determine how many, and ways to protect their habitat.

The team has reported back last season’s remote camera images, and mountain lions appeared on eight of the 42 deployed, indicating that the felines are fairly well distributed throughout the park. The lions were photographed over 700 times. The only animals captured more times on camera were native black bears and mule deer. 40 other wildlife species were also spotted on the images, ranging from bobcats to foxes and northern saw-whet owls and sooty grouse.