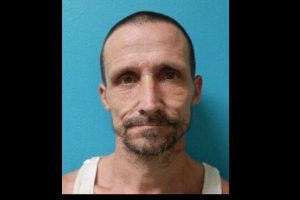 Columbia, CA – Hearing two people arguing and one person threatening the other with a gun on an open call to 911 brought Tuolumne County Sheriff’s Deputies to a Columbia home recently.

Sheriff’s officials detail that dispatch received a call with no one on the line but it was intentionally left connect so dispatch could hear the ongoing argument in the background with one of the parties mentioning having a firearm. When deputies pulled up to the residence, they could see two people arguing in the front yard. They quickly pulled the pair apart before it became physical.

During questioning, deputies learned that 42-year-old Elvis Babcock of Columbia had allegedly made threats to harm the other person involved in the argument while pointing a shotgun at the victim.

Babcock, who is a convicted felon and is prohibited from possessing firearms, was arrested for brandishing a firearm, criminal threats, and felon in possession of a firearm. The firearm was seized and booked as evidence. His bail was set at $25,000.