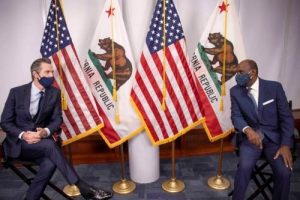 Governor Gavin Newsom says his pick to join the California Supreme Court is a first.

At a noon press conference, Newsom announced that 66-year-old Martin Jenkins is his top choice to be appointed to the state’s highest court. Jenkins currently serves as Newsom’s Judicial Appointments Secretary, and previously served as a US District Court Judge, and a Justice of the California Court of Appeal for the First District. He also had a brief career in the NFL prior to focusing on law.

Newsom says it is historic in that Jenkins is the first openly gay person nominated for the state’s supreme court, and the third African American man.

“Justice Jenkins is widely respected among lawyers and jurists, active in his Oakland community and his faith, and is a decent man to his core,” said Governor Newsom. “As a critical member of my senior leadership team, I’ve seen firsthand that Justice Jenkins possesses brilliance and humility in equal measure. The people of California could not ask for a better jurist or kinder person to take on this important responsibility.”

Jenkins added, “I am truly humbled and honored to be asked by the Governor to continue serving the people of California on the Supreme Court. If confirmed, I will serve with the highest ethical standards that have guided me throughout my career, informed by the law and what I understand to be fair and just.”

Newsom says he hopes that confirmation hearings will be concluded within the next month.