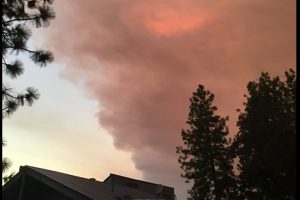 Fresno County, CA — The Creek Fire burning in the Shaver Lake area of Fresno in Fresno County continues to impact the Mother Lode.

Ash could be seen on many vehicles this morning and there is an orange haze over the region as the smoke is blocking out the sun’s rays, as pictures in the image box show. CAL Fire relays that firefighters were able to hold the acreage steady overnight at 36,000 acres, but there is still no containment.

Last night, the swift-moving flames cut off any escape route for nearly 200 campers near the Mammoth Pool Reservoir. The National Guard was called in to help evacuate them using military helicopters around 10 p.m. The Fresno County Sheriff’s office reported that 20 -30 individuals were injured, some severely. There are mandatory evacuations in the Shaver Lake area as at least 3,000 structures are threatened, according to U.S. Forest Service officials.

As reported here yesterday, the Creek Fire was ignited Friday night near the San Joaquin River and the Big Creek and Huntington Lake communities. What ignited the blaze remains under investigation.

A special thanks to our community partner Ralph  Richards and Phil Nichols for sending in photos.