Two Fires In Yosemite Have Burned Around 500 Acres Each 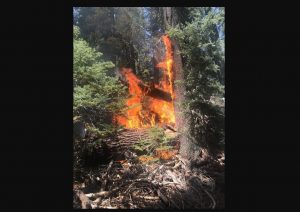 The Blue Jay Fire, which ignited on July 24, is now 508 acres and 15-percent contained. It is burning at an elevation of 9000 feet and is about four miles south of White Wolf Campground and one mile west of Lukens Lake Trail.

Yosemite Fire Management officials report, “The fire has a 40% active perimeter burning in pockets of accumulated dead and down logs and is creeping and backing with some isolated single tree torching along the active perimeter. When conditions are favorable fire personnel are conducting firing operations to help bring the fire’s edge to natural containment lines.”

Meanwhile, the Wolf Fire, which was located on August 11, is 494 acres and there is no containment. It is burning one mile north of White Wolf Campground and two miles east of Lukens Lake Trail.

The incident report notes, “The fire has an 80% active perimeter primarily on the north and northwest edge. The fire is burning in dense pockets of vegetation and accumulated dead and down logs and is creeping along the forest floor with some isolated single tree torching and short-range spotting along the active perimeter.”

The fires are visible from high elevation areas, such as Tioga and Glacier passes.

To view a map of the fire areas, click here.