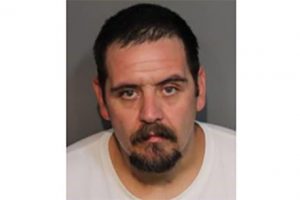 Arnold, CA – Recognize the man in the image box?

Calaveras County Sheriff’s Detectives believe he is the suspect responsible for burglarizing the Alpine Coin Laundry located in 2000 block Highway 4 in Arnold.  The owner of a coin-operated laundromat told investigators that a $3,000 coin machine had been vandalized and about $400 dollars in coins were stolen.

A quick check of the businesses’ security footage along with other evidence targeted 42-year-old William Thomas Roraback of Valley Springs for the alleged crime. Warrants have been issued for his arrest, but detectives have not been able to locate Roraback, who is known to frequent the Arnold area.

Sheriff’s officials gave this description of Roraback. He is 6’4” tall and about 300 pounds with brown hair and hazel eyes. He also has a tattoo on his right forearm.

Roraback is wanted for felony parole violation and burglary. Anyone with any information regarding the burglary or his whereabouts is asked to call detectives at 209-754-6500 or the anonymous tip line at 209-754-6030.