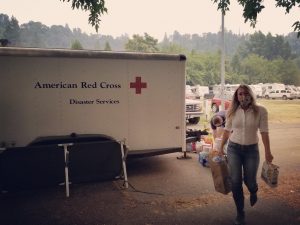 Sonora, CA — The candidate running against Congressman Tom McClintock has been making some recent stops in the Mother Lode.

Democrat Brynne Kennedy helped coordinate a donation drive and many goods were dropped off at the Moc Fire evacuation center last Saturday at the Mother Lode Fairgrounds. She also spent time visiting and talking with businesses in Columbia.

Because of social distancing protocols, and rules discouraging group gatherings, she will hold a virtual town hall meeting tomorrow (Saturday) for residents of Tuolumne, Calaveras and Amador counties. It is a chance for people to ask questions and is part of what she is calling a “Town Hall Tour” which will eventually span all of the counties in the Congressional District Four.

Speaking with Clarke Broadcasting, Kennedy says she is focusing heavily on “jobs, healthcare and retirement security.” Adding, “Obviously COVID-19 has thrown a lot of challenges to our community, our small business owners, and folks whose jobs have been disrupted, and folks who have been affected by the virus. My campaign is focused on is making sure that we can move forward with a safe and pragmatic reopening of our economy, our businesses and our schools.”

Asked specifically about ways to boost the rural economy, she says it is critical to invest in broadband internet-related initiatives. “I know we have broadband deserts through much of the Mother Lode area. I am a big believer that we need to invest in our infrastructure so that everyone has connectivity.”

Questioned about the health of the local forest, and the current wildfire season, she says, “It is no secret that our forests are pretty unhealthy right now and a single ignition point can spark a very, very large fire. We’ve got to make sure that the Forest Service has the funding to clear the high-risk underbrush and manage our forests to health. I am also a big believer that government is not a solution. Government can be a partner, but we also have to partner with the private sector. There are a lot of innovators that are creating things like small scale biomass, or a partnership with the prefab industry, so that when we do work on thinning our forest, there can be a profit incentive, at the end, to fund some of those activities.”

Kennedy stated she is optimistic about the race, despite running in a heavily Republican district.

She argues that it is a unique time in the country, with the coronavirus pandemic, high unemployment, and home insecurity. “There are a lot of people who are struggling and have challenges. These are not Democrat and Republican issues…these are American issues.”

Kennedy, 36, spent 15 years in the private sector prior to running for Congress, and is the founder and former CEO of Topia, a software company.

There were six candidates in the March primary election, and incumbent Tom McClintock recorded 50.7-percent of the vote and Kennedy had 39.8-percent. The top two vote-getters moved onto the November general election.