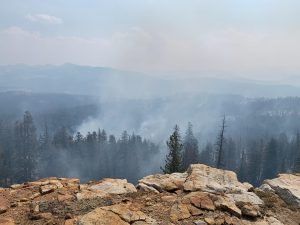 The Blue Jay Fire, which was discovered on July 24, is now 275 acres and 15-percent contained. It is burning four miles south of White Wolf Campground and a mile west of Lukens Lake Trail. It is located at approximately 9,000 feet elevation.

Meanwhile, the Wolf Fire, situated one mile north of White Wolf Campground and two miles east of Lukens Lake Trail, is 289 acres and there is no containment. The fire is also at about 9,000 feet elevation and it was discovered on August 11.

Yosemite National Park reports, “The strategy for both fires is to confine and contain to a specific area, utilizing natural barriers for the fires to burn into, such as granite and bare ground. This minimizes fire suppression impacts in the wilderness and reduces exposure to firefighters in a remote area of the park where there are no trails or campgrounds. National Park Service and Forest Service resources are committed to both fires and will continue to monitor fire weather behavior and growth.”

Both fires may be visible from Tioga Road, Glacier Point, and from high country vistas.