McClintock, Harris, Feinstein And Others Speak At Virtual Summit 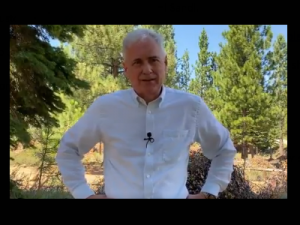 Much of McClintock’s speech was on a desire to see forest vegetation thinned out following the decline in logging operations over recent decades. He stated, “Well intentioned environmental laws passed in the 1970’s make that process (timber harvesting) endlessly time consuming and ultimately cost prohibitive.”

He added, “An untended forest is no different than an untended garden. It will grow and grow until it chokes itself to death and then fall victim to disease, pestilent, and drought.”

McClintock highlighted a bipartisan effort to acquire a categorical exclusion from the National Environmental Policy Act (NEPA) four years ago to streamline some of the forest projects in the Tahoe basin. He says the review process for some projects has been reduced from years to months, and the documents have gone from hundreds of pages, to dozens. McClintock warned that fire could devastate Tahoe in a similar fashion to Paradise, two years ago, so quick action is needed.

California Senator Diane Feinstein focused her speech on climate change and its impacts on the Sierra, and more specifically Lake Tahoe.

She stated, “It threatens to rollback much of our progress. It is allowing invasive species to thrive, it is killing off trees, it is cutting off the snowpack, and it is reducing water clarity in the lake.”

She added, “For every step we take forward, climate change threatens to take us take two steps back. This is a call to action and we’ve got to respond with urgency and science based solutions.”

California Senator Harris stated that actions to combat climate change, and other efforts to improve forest health, will have long range implications. She says it is to “ensure future generations that they can also enjoy this most beautiful part of our country.”

This year’s Tahoe Summit was held virtually due to COVID-19.

Governor Gavin Newsom was also a speaker. The keynote address was delivered by David Wise, a two-time Olympic Gold Medalist.