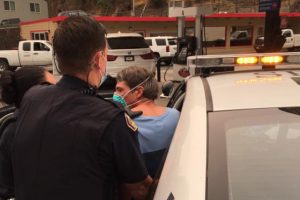 Suspect being arrested at Sonora gas station on Stockton Street

Sonora, CA – A report of a stolen vehicle led police to a Sonora gas station where the driver allegedly threatened a clerk while stating that he had a gun.

The initial call came into Sonora Police dispatch at around 3 p.m. on Wednesday regarding a possible stolen vehicle driving erratically on South Washington without any license plates. Minutes later, a second call came in from the Country Qwik Way gas station on West Stockton Street reporting an altercation with an employee and a customer. The description of the customer’s vehicle matched that of the potential stolen one.

The suspect, 54-year-old Sean Howard, of Long Barn, refused to follow the commands given by arriving officers. Police detail Howard put up a short struggle but eventually was handcuffed with no injuries to himself of officers reported.

It was determined that the vehicle was not stolen. Also, no firearm was found on Howard or inside the vehicle. Howard was arrested on a $25,000 bond for resisting arrest and criminal threats.