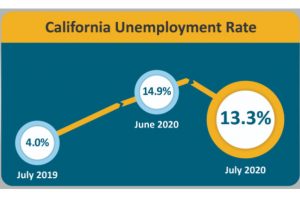 Sonora, CA — California’s jobless rate dipped to 13.3% in July from 14.9 percent in the previous month amid a coronavirus pandemic marked by workplace stops and starts that have plunged the world’s fifth-largest economy into disarray.

The state’s unemployment rate, while falling 1.6 percentage points since June, is still higher than it ever got during the Great Recession, according to Friday’s unemployment report issued by California’s Employment Development Department (EDD). The state has processed more than 10.7 million claims for unemployment benefits since March. The federal government had been paying people an additional $600 per week, but those benefits expired at the end of July. Local workforce development boards say that has resulted in more people looking for work.

The Mother Lode followed that downward trend for a second straight month. Tuolumne County’s rate dropped from 14.49-percent in June to 12.6 percent last month. Out of a workforce of 19,780, there remains 2,480 without a job. In Calaveras County, the July jobless rate decreased to 9.6 percent from 11 percent in June, leaving 1,980 unemployed out of a workforce of 20,600.

Tied for the lowest rate is Lassen and Trinity counties with 8.8 percent. Imperial County has the highest rate at 26.8 percent, which is actually down from June’s 27.3 percent rate.

Nine sectors gained jobs with transportation and utilities showing the biggest gains at 40,900 and construction had the most job losses at 14,800. The national unemployment rate fell 10.2% in July from 11.1% in June.

EDD officials advise that July’s jobs report could be understated since it is based on surveys taken in the middle of the month. According to the U.S. Bureau of Labor Statistics, unemployment rates fell in 30 states, rose in nine states, and stayed the same in 11 states and the District of Columbia. The national unemployment rate fell to10.2% in July from 11.1% in June.