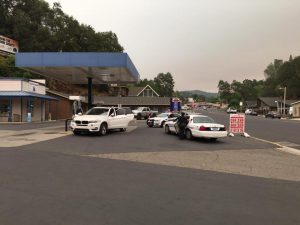 Arrest of Sean Howard In Sonora

Sonora, CA — The Sonora Police Department received a call about a man threatening an employee of a business in the 300 block of Stockton Street.

The worker stated that the man also mentioned having a gun. It was reported on Tuesday afternoon. The PD was already looking for the man and his vehicle, because a short time earlier the department received a tip that someone matching the description was driving erratically without license plates.

Officers found the man, identified as 54-year-old Sean Howard of Long Barn, outside the business. The PD reports that he refused to follow commands and resisted arrest. Eventually, he was taken into custody. There were no injuries to him or the officers.  No firearm was found on him or in the vehicle. He was booked into Tuolumne County jail on $25,000 bail for making criminal threats and resisting arrest.