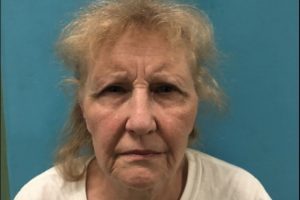 Sonora, CA – A vicious attack of an elderly woman outside a Sonora grocery store produced a flurry of reports to Sonora Police yesterday afternoon – shockingly the suspect arrested was a relative.

The calls started coming in around 4:30 p.m. Wednesday sending officers rushing to the parking lot of the Lower SaveMart on Stockton Road. Witnesses described a woman repeatedly striking another elderly woman with her hands and fist and then dragging her by her hair.

Officers located the two women, and during questioning learned they were relatives. Chief Turu VanderWiel would not reveal how they were related due to the sensitive nature of the case but stated the victim was an 89-year-old. Arrested for felony elder abuse was, 67-year-old Jeryl D. Schwartz.

The Chief adds that the abuse did not stop with the beating in the nearly triple-digit heat, “Schwartz had left the victim in the vehicle for some time while she was in the store. The windows were up, and the engine was off, so no air conditioner was running.”

The victim was treated at the hospital for non-life-threatening injuries. Chief VanderWiel shares officers took initial precautions to ensure that the victim would not be placed back in Schwartz’s immediate care by seeking a temporary Emergency Protective Order. It lasts up to seven days. After that, the victim can seek a Temporary Restraining Order that can last up to two years.