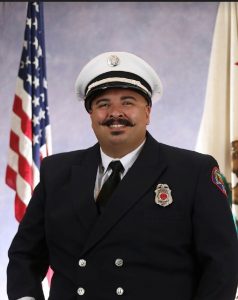 Former Twain Harte Training Fire Captain Neil Gamez has been promoted to the top position recently vacated by Chief Todd McNeal, who took over as Fire Chief for a larger jurisdiction, the City of Dixon, which is located between Davis and Vacaville.

Gamez, who worked with McNeal for 15 years and subsequently followed him nine years ago when McNeal traded his captain’s position at Sonora Fire Department to become the Twain Harte Fire Chief, is a 25-year firefighting veteran.

The new chief, who joined Tuolumne County Fire Department as a Fire Explorer, initially worked with the U.S. Forest Service on the Stanislaus National Forest. Besides working for the City of Sonora, he also served as a firefighter for the Columbia and Mi Wuk fire departments. Born and raised in Tuolumne County, Gamez, a member of the Sonora High Class of 1998, is married with two sons, ages nine and five.

In their announcement, district officials stated Chief Gamez’s extensive experience, passion, and excellent relationships will support their continued commitment to providing excellent community service for many years to come.

Sharing his plans moving forward, he states, “First and foremost, [it is] making sure that we have complete involvement with the community and keep those relationships going with business owners, community members, and visitors.” His five-year-plan includes increasing staffing, keeping the department’s vision, policies and procedures updated, and maintaining its low response time between three to five minutes average.

“We are very fortunate to have our partners across the street, the Twain Harte-CAL Fire station,” he shares, which helps ensure that in the summertime any kind of major incident will be able to produce three engines in three minutes. He also points to the department’s ability to maintain continuous training at its location on Vantage Point Drive.

Asked if there is anything else he would like the community to know, he shares, “My full intent is to stay in this position until I retire, make sure our department is fully transparent with great communications with our community, and make sure everyone knows we always have an open door policy. If there are questions that anybody has…they can stop by at any time, make an appointment, and I’ll sit down and talk with them about their concerns.”