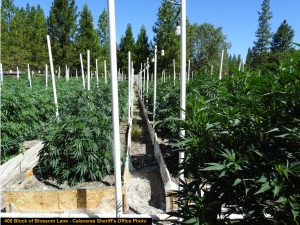 Officials note that one of the warrant searches involved a property the Calaveras County Marijuana Enforcement Team (MET) had already visited twice in the past three months and once back in 2018, each time eradicating illegal cannabis. During their third visit last Wednesday to the site, located in the 400-block of Blossom Lane, Railroad Flat, deputies seized over 340 growing plants with a street value of over $1 million.

While no suspects were located at the site, the investigation continues. Previous investigations have resulted in the issuing of an arrest warrant for 31-year-old Krsnathakur Widmer of Bader, California.

The same day, in the 1400-block of Hidden Valley Road, West Point, deputies seized over 800 plants with an estimated value exceeding $571,000. Two suspects were located at the site and cited. They are 81-year-old Fay Villalobos of West Point and 31-year-old Imanol Marte Martinez of Livingston. Both are charged with illegal marijuana cultivation and possession of marijuana for sale.

A search warrant served at a third stop in the 8000-block of West Murray Creek Road, Mountain Ranch resulted in the seizure of 285 growing plants with an estimated value of just under $200,000. One suspect was located at the scene: May Lao Her, 51, of Fresno. She was cited for illegal cultivation and possession of marijuana for sale.

They also report that during a warrant search Friday in the 12000-block of Armstrong Road, Sheep Ranch turned up over 800 plants estimated with a value of over $569,000. Officials report the illegal operation was dispersed and hidden among trees and brush and debris, trash, and human waste provided clear evidence that people were living onsite in primitive conditions.

Additionally, extensive lengths of plastic piping had been set up to carry water directly from a nearby creek. The MET also located fertilizers and pesticides stored and used above the creek as part of the makeshift irrigation. While no suspects were located at the site, evidence seized is being used in the ongoing investigation.

You can view images of the warrant search locations by clicking into the image box slideshow.

Anyone with knowledge of illegal marijuana operations is encouraged to call the Sheriff’s Office Anonymous Marijuana Tip Line at 209 754-6870.