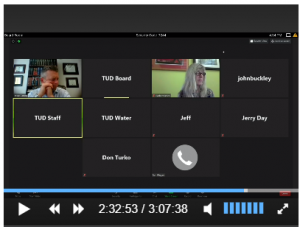 Sonora, CA — With a 3-1 vote, after one director dropped out of the meeting, the TUD Board of Directors approved a response to this year’s Grand Jury Report.

We reported earlier that the Grand Jury was critical of potential conflicts of interest with individual board members, questioned whether it’s appropriate for TUD to be a part of a private organization not subject to open meeting laws, raised concerns about the overall financial health of the district, and pointed out that the terms and conditions of a recycled water use agreement are difficult to interpret.

TUD staff then drafted a 17-page response, which can be found here.

When Tuesday’s meeting opened, prior to the discussion about the Grand Jury response, board member Ron Ringen argued that the TUD administration was not being transparent with him because when he wants additional information about meeting items he is required to go directly to General Manager Ed Pattison for all matters, noting that this is a change from when he first joined the board. He argued that Pattison then puts his “own spin” on things.

When the time came on Tuesday for discussion about the Grand Jury Report, Ringen said that he was not asked personally for any input, and the district’s draft response came as a “complete surprise” to him. It was signed by Board Chair Bob Rucker and GM Pattison.

At various points during Tuesday’s meeting, Pattison, and Board Members Ron Kopf and Rucker argued that Ringen was being “hostile in nature” and acting in violation of board policies. Ringen also was critical of those two members at times. When GM Pattison made reference to his phone line always being open for board members to reach out, Ringen fired back, “I’m not going to talk to you anymore.”

Ringen added that he feels the district’s Grand Jury response is “misleading and inaccurate.”

Director Jeff Kerns took issue, and asked Pattison if any members of the board had relayed any concerns ahead of the meeting after the proposed response was finalized and made public last Wednesday, and Pattison said he had received no feedback.

Pattison added that the district spent around 100 hours dealing with the Grand Jury Report, and there was much information relayed to the citizens group months ago which failed to be included in the final report. That information is highlighted in the district’s response.

Related to one item of criticism noted in the watchdog report, board member Barbara Balen stated that she would like to see the directors more regularly take time to review which organizations the district financially supports and joins. Board member Ron Kopf said he could support adding language to the response that states the district would be more transparent in that regard and is open to having a committee look at the issue. GM Pattison argued that some of those issues about membership had already been brought up during budget discussions.

In the end, board member Kerns made a motion to approve the response as drafted, without any changes, and it was seconded by board member Rucker.

Right before the vote, GM Pattison pointed out that Ringen had left the online meeting, so they decided to take a break to see if it was a technical issue, and if he wanted to rejoin and vote. The meeting reconvened and Pattison stated that a staff member had reached Ringen and it was believed that he was going to log back on and vote. However, he did not. Details were unclear as to why.

The final vote was 3-1, with Balen opposed, and Ringen not voting.

The entire meeting video is archived by TUD, which you can find here.

The TUD Meetings will be available in the More Section of myMotherLode.com when the TUD board is in session. Meetings are usually on the second and fourth Tuesday at 2 p.m. To view now click here.