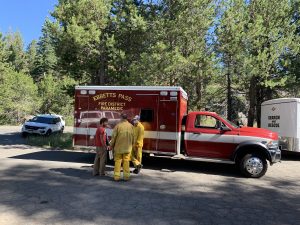 As we reported earlier, he went missing Tuesday after going fishing near the Camp Wolfeboro campground in the Tamarack. The sheriff’s office reports that he was located this morning by a search team on the ground northeast of the confluence of Highland Creek and the Stanislaus River. He was transported to the command post where he was evaluated by Ebbett’s Pass Fire District Medics.

Original story posted at 6:20am: Tamarack, CA — The Calaveras County Sheriff’s Office Search and Rescue Team is looking for a man who went missing yesterday.

34-year-old Timothy Bone was fishing in the morning with family members near the Camp Wolfeboro Campground in the Tamarack area.

The sheriff’s office reports, “Sometime while fishing they became separated. When Timothy did not return to camp, friends and family began checking the area.”

The search and rescue team has been searching on the ground since around 4pm yesterday, and a CHP Helicopter has been assisting by air. The sheriff’s office has also requested additional help from the California Office of Emergency Services.

Anyone with information that could help the search should call the sheriff’s office at 209-754-6500.