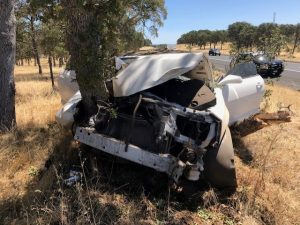 Sonora, CA – CHP officials are releasing details of a solo crash that occurred just before noon on Highway 120.

According to Sonora Unit CHP officials, around 11:30 a.m. 54-year-old Sarah Freitas of Hughson was driving her 2015 Chevy Camaro westbound on the highway west of Rushing Hill Lookout at approximately 65 miles per hour when she entered a left-hand curve in the roadway and was unable to negotiate it.

As a result, she traveled off the north edge onto a dirt and grass shoulder for approximately 300 feet until the front of her vehicle crashed into a tree. She sustained moderate injuries and was transported by ambulance to Doctors Medical Center in Modesto.