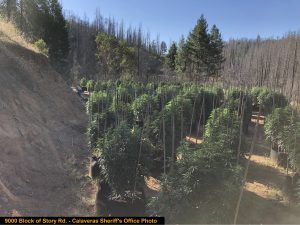 Last Tuesday, during a warrant search on a Mountain Ranch parcel with no assigned address near Lucky Jim Mine Road and Whiskey Slide Road, the MET raided a grow site in a secluded area not accessible by vehicles. There, they seized nearly 660 marijuana plants and approximately 50 pounds of processed marijuana with an estimated value exceeding $496,000. No suspects were contacted on the scene, but the investigation is ongoing.

Thursday, in Copperopolis at an illegal marijuana cultivation site in the 500-block of Pinon Drive, the MET hauled off 740 plants and five pounds of processed marijuana with an estimated value of more than $518,000. They also seized four firearms and called Calaveras County Code Enforcement to address code violations.

Two suspects at the location were booked into Calaveras County Jail following an initial investigation. They are 18-year-old Alexander Garcia Bailon and 20-year-old Samuel Pacheco, both of Copperopolis. Both received a $150,000 bail. Issued a citation was 68-year-old Jeffrey Goodpasture. The investigation is ongoing but initial charge include illegal marijuana cultivation; possession of marijuana for sale; maintaining premises for selling controlled substances, and conspiracy to commit a crime

The same day, in the 4000-block of Rocky Road in San Andreas, deputies seized nearly 500 plants and 85 pounds of processed marijuana with an estimated value of over $347,000. No suspects were located onsite but the investigation continues.

Additionally, the MET visited a site in the 9000-block of Story Road, in Mountain Ranch where they seized over 140 plants and over nine pounds of processed marijuana with an estimated value of over $107,000. They also found and seized one firearm and arrested 52-year-old Brian Foster of Fernley, Nevada. In addition to related drug charges, he faces charges of being a felon in possession of a firearm. His bail was set at $175,000.

Finally, on Friday, the MET served a search warrant in Vallecito on another remote parcel with no assigned address off Camp Nine Road, where they seized about 790 plants with an estimated value exceeding $550,000. No suspects were located but the investigation is ongoing.