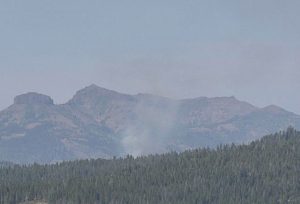 Update at 7:20pm: The Stanislaus National Forest reports that the forward spread has been stopped on the Vista Fire near Donnell Vista. The size is estimated to be between 1-2 acres. A hose line is laid around 3/4 of the fire. Crews will monitor it overnight and continue to check it throughout Monday.

Update at 6pm: Firefighters are making progress slowing the Vista Fire near the Donnell Vista in the Stanislaus National Forest. The CAL Fire fixed wing aircraft that was assisting has just been released from the incident, but a helicopter, and ground crews, are still helping to fight the fire.

The fire is estimated to be under an acre in size. Click here to view a webcam aimed at the incident.

Update at 4:22pm: The so-called “Vista Fire” burning near the Donnell Vista in the Stanislaus National Forest is still estimated to be under an acre in size. Air and ground resources from CAL Fire are assisting the Forest Service in fighting the fire.

You can find a webcam image of the incident by clicking here.

Original story posted at 3:45pm: Tuolumne County, CA — Air resources from Columbia have been called to help fight a fire in the Stanislaus National Forest.

It is near the Donnell Vista area. The fire is under an acre in size. We’ll pass along more information when it becomes available.