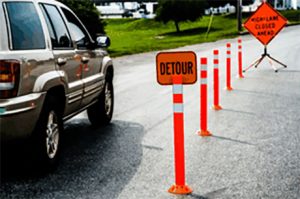 Beginning Monday, August 3, and continuing through the month of October, there will be traffic delays to accommodate layout and installation of delineators posts along the shoulders of several county-maintained roads. Delineators are poles with reflective tape on them, as shown in the image box. They can be used to direct traffic and warn drivers of things like a drop off at a road’s edge.

Calaveras County Public Works Department has hired McGuire-Pacific Constructors out of Auburn for the Delineator Installation Project. Crews will be installing the delineators weekdays from 7 a.m. to 4 p.m.  The work requires layout operations to be conducted first. County roads officials say that should be complete by mid-August and will mainly require shoulder closures, with reduced traffic lanes and flaggers in some locations.

Then crews will begin the installation operations next, which also require one-way traffic and flaggers directing traffic due to large construction equipment that will be on site.  Motorists can expect up to 10-minutes delays in some areas and are urged to use caution in the cone zones. Below is a list of the roadways impacted and where crews will be working.

Questions regarding the project can be directed to the county’s public works department at (209) 754-6401.