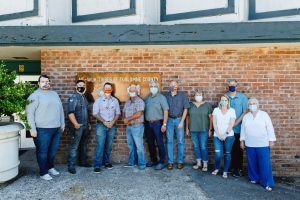 Sonora, CA – A popular building on the Mother Lode Fairgrounds has undergone a name change.

The facility, formerly known as the main John Muir Building has been rechristened in honor of the Chicken Ranch Rancheria Me–Wuk Indians of California and the Tuolumne Band of Me–Wuk Indians as part of their partnership in sponsoring the fairgrounds, home to many popular events including the Mother Lode Fair and Mother Lode Round-Up. As part of the partnership, the structure has been renamed the Me-Wuk Tribes of Tuolumne County Building.

Although the Tribes publicly shared the news this week, it is of interest that the renaming ceremony was held back on July 7 when members from both Tribal Councils met at the fairgrounds for the unveiling of the new signage. The Sierra Club came out with a statement five days ago publicly apologizing for belittling comments made well over a century ago by Muir, the club’s founder about people of color, including Native Americans and African Americans.

Both Tribal Chairmen stated that the renaming ceremony carried special significance and honor for their tribes. “Me-Wuk Tribes have resided in the Motherlode for time immemorial and were living in the Yosemite Valley up until the time it was designated as a National Park,” notes Kevin Day, Tribal Chairman of the Tuolumne Band of Me-Wuk Indians.

“If you research the history of the Tribes in the region, we were systematically removed from our ancestral lands, like Yosemite, so the renaming of the building to the Me-Wuk Tribes of Tuolumne County shows how positive the relationship has become between Tuolumne County and the Tribes. We encourage education to the plight of the Me-Wuk Tribes in Yosemite and the Motherlode.”

Chicken Ranch Rancheria Tribal Chairman, Lloyd Mathiesen, echoes the sentiment. “Our main goal for our continued sponsorship with the Mother Lode Fairgrounds is to not be a part of something that celebrates the name of a man who worked to tear down our people.”

The tribal chairs point out that although Muir is widely known as “the father of the national parks” and was pivotal in their establishment, he also supported the extraction of indigenous peoples from their native lands in the name of maintaining a “balance of nature,” an effort that eventually became a widespread practice stretching from Yosemite to Yellowstone and beyond.