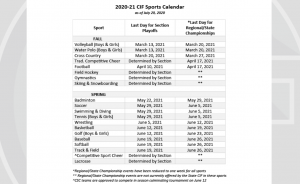 The California Interscholastic Federation (CIF)  announced this morning that under a revised schedule, traditional fall sports will now begin in either December or January. Each CIF Section is tasked with putting together its own regular-season schedule in the days ahead.

With the change, traditional winter sports like basketball and wrestling will be moved to the spring. Click on the image box to see more details regarding the revised schedule.

The CIF notes that the ability to resume sports in December/January is still subject to approval from both local and state public health officials prior to the start of the season. The action comes as most schools in the State of California are planning to begin the year in either a hybrid or full distance learning model due to COVID-19 concerns.