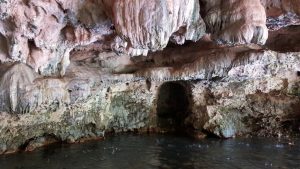 San Andreas, CA – Emergency responders now have faster access to a popular natural attraction that is drawing a huge number of visitors, thanks to cooperating agencies’ efforts.

In the NewsCenter, Clarke Broadcasting has heard scanner reports of at least three emergency response calls to Natural Bridges in as many weeks. BOR, as reported here, reopened the attraction to the public at the end of June under COVID-19 related federal and state guidance.

According to the sheriff, while his office responds mostly for vehicle break-ins at the top of the roadway near the trailhead, fire responders assisting injured hikers faced a strenuous 45-minute to an hour-long process to access and pack up a patient onto a backboard and then walk back out. Summer heat further contributes to the challenge.

“They go down there a lot and that is why we offered up a UTV to be able to get access down there in a timely manner,” he continues, adding that the county was able to pick up the vehicle for free from the military after which it was given to the county sheriff’s office and is now being loaned to Murphys Fire.

BOR agreed to provide access through a combination-locked gate to a fire emergency route using an old stagecoach path off Parrotts Ferry Road. “It’s wide enough for a UTV to get down to the top of the stairs at Natural Bridges so when we have injured people, we can get them out in a timely manner…10 to 15 minutes, which is huge.” Sheriff DiBasilio further explains. The access brings responders within 500 feet of the water.

Last Friday, a day after the new arrangements were in place, responders were called to the site for emergency medical assistance.

The sheriff, who grew up in the area, says he has been to Natural Bridges many times over the years, including recently with his family. To view, some of his photos click into the image box slideshow.

“There are definitely more people down there now than have been in the past…it has gotten extremely busy…and when I say extremely busy, I am talking probably twice as many people as normal are going in there now,” he guesstimates. “They are parking all up and down the roadway – legally – and if they are parking illegally, I know CHP is actually citing people.”

He adds, “It’s not an easy hike. Getting to the top of the stairs is a UTV trail five to ten feet wide. But the stairs, the 200 yards down to the river is…steep, very uneven steps, rocks, and loose dirt. It’s a deal to get down there and I think that is where a lot of the twisted ankles [injuries] probably come from – along with jumping around on the rocks that are actually down in the river.”

Although it is not obvious from the roadway, the sheriff says there is plenty of areas below to spread out for social distancing, kind of like camping although it is a day-use area. “There is enough room and you make space and keep your distance from everybody.”

Commenting on the local agencies’ new arrangement with BOR, Sheriff DiBasilio says it is a “win-win” for locals and out-of-towners who visit Natural Bridges. He adds that now that there is easier in-and-out access, his office is also planning extra patrols.

“I think it is going to be a good thing all the way around,” he confides. “Visitors will see more of a sheriff’s presence and I think it will help with the car break-ins and any potential issues that we might have with people getting upset with each other because there are so many people down there –we have not yet had a call down there for a fight, knock on wood.”