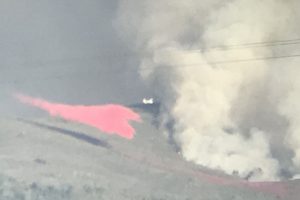 The acreage remains steady at 1455 acres. Overnight, crews continued to strengthen and reinforce firelines. CAL Fire spokesperson Emily Kilgore reports that rough terrain makes access to the eastern flank of the fire difficult as firefighters have to hike into the area to reach the flames. Kilgore details what some of the crews will be focused on today, “Suppression repair efforts will continue. They are just reducing some of the erosion that might occur once rains come and fixing any lands that may have been damaged during suppression efforts.”

Regarding resources currently on the scene, Kilgore relays, “Mostly dozers and hand crews and engines. I don’t believe there’s any aircraft assigned to the fire at this time, but it’s nearby in Columbia if we need it.”

The fire ignited Tuesday evening in the 12000 block of Walker Trail near New Hogan Dam Road, as reported here. Initially, three DC-10s helped to lay retardant around the flames. Two days later, on Wednesday, CAL Fire reported that the forward rate of spread was stopped, as detailed here. At the height of the blaze, there was 900 fire personnel working the fire.