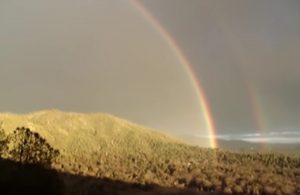 Mariposa, CA — A man from Mariposa County who shot a video from his home of a double rainbow in 2010, and gained national notoriety for it, has died.

It was not the grainy video that put the national spotlight on Paul L. Vasquez, but it was his enthusiastic reaction. He went on to be interviewed on national talk shows like Jimmy Kimmel Live, and was hired to voice commercials for major companies like Microsoft and Delta Airlines.

Vasquez, who went by the name Yosemitebear on social media, passed away early Saturday morning at the John C. Fremont hospital in Mariposa County.

The Mariposa County Coroner’s Office has not released the cause of death.

The Associated Press reports that Vasquez had recently posted on his Facebook page that he had gone to get tested for COVID-19 but learned about another unspecified ailment.