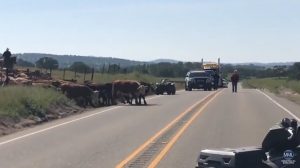 Sonora, CA — Call it having the advantage of a COVID-captive audience or the cool capturing of an intriguing activity most folks don’t usually see nowadays: a cattle run across a local highway.

CHP Sonora Unit Officer Steve Machado laughs, recounting to Clarke Broadcasting how a video of a large herd crossing J-59 La Grange Road turned out to be one of the most popular items they have publicly posted through their social media channels.

His office received a request for assistance the night before and arrived at 10 a.m. Wednesday to see several dozen head of brown cattle coming down towards the fence on the eastern side of the road, north of Seven Legends.

“There were two attempts to run the cattle and we shut the road down for about 30 seconds but they turned and ran up the hillside,” Macedo shares. “Once the cattle came along the fence line with six cowboys on horses, and two on quads we closed the roadway as they got them to go through the gate with both the quads on either side funneling the cattle as they were run across La Grange Road to the the pasture on the west side.”

He dryly notes, as the video (viewable in the image box link) shows, apparently the cattle did not get the executive order for social distancing. Meanwhile, the temporary closure, which affected seven or eight vehicles for about ten minutes generated no complaints and significant interest from drivers and riders, who emerged to shoot their own footage and photos.

While the CHP gets many requests for highway closures, they generally have to do with accidents and vehicle tows. Macedo recalls among the more unique assistance calls they have responded to over the years involved a sheep run through the same area, and a traffic stop on Highway 108 between Long Barn and Little Sweden for a documentary featuring a para-Olympian.

He adds, “Five or six years ago, Porsche out of Germany had us close the Jacksonville and Don Pedro bridges for a super-secret car-make commercial for what is now the 4-door Porsche. They would cover the car back up each time before traffic was allowed to pass.”

During the Stay At Home order, Macedo acknowledges that reduced traffic volume and criminal activities has provide the unit an opportunity to share some of their more colorful behind the scenes activities and even some inspired shots of local sunsets and wildflowers in bloom. He shrugs, “It’s a snippet of time that we are in that is unique and gives us an opportunity for some extra — creative activities.”