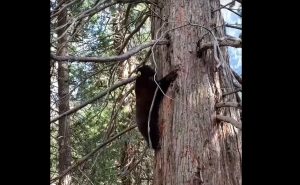 Yosemite, CA — While most of us are sheltering in place, Yosemite National Park’s emerging black bear population is apparently reveling on having more room to move with no visitors afoot.

Park rangers estimate the park’s black bear population at somewhere between 300 and 500 and while the population has not risen since the park closure, they have been more visibly active in Yosemite Valley, including hitting the fresh spring meadow grass “salad bar” near tourist-free Yosemite Village.

Like many other national and state parks, the Yosemite rangers have been busy sharing virtual experiences with online viewers. In fact, on Monday, during a demonstration of the park’s bear team use of radio collars to track some of the bears, one of the biologists was able to detect a large male bear in a nearby meadow.

Following hibernation, Yosemite’s bears typically become active again in late March or April and spend a good deal of time foraging on early spring foods, regaining up to a third of their lost body weight. Males are typically the first to emerge from their dens while sows with cubs are usually the last to appear.

Fortunately for us wildlife voyeurs from a window overlooking the area, someone snared video footage of the adventuresome male bear as he scaled a tree and enjoyed a high-branch perch for a spell before facing the awkward task of figuring out how to maneuver his way back down. To view the clip, click into the image box video link.

While watching the bear’s antics does not take the place of a Yosemite Valley walk — or qualify as any sort of physical exercise, hey, at least it can be easily done in pajamas while enjoying a handful or three of freshly popped microwave popcorn.