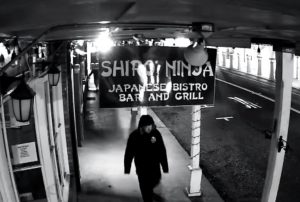 We reported earlier that someone smashed the window at Three-Hawks (TH) Jewelers on March 23rd and took off with around $20,000 in merchandise. A caller reported seeing a man dressed in all black commit the crime and then take off on foot northbound.

Anyone with information regarding the suspect pictured is asked to call the Sonora PD at 209-532-8141.