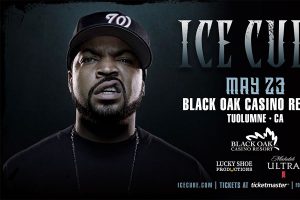 Tuolumne, CA — Taking the stage at the Westside Pavilion for its 2020 Black Oak Casino Concert Series is a rap icon.

Rappers Ice Cube, who is also an actor, has been inducted into the Rock & Roll Hall of Fame and his production company even produced an Oscar-nominated movie, will play the venue located off of Tuolumne Road in Tuolumne on Saturday, May 23rd at 7 p.m. Ice Cube is one of the founding members of N.W.A., pioneers of the gangsta rap genre. At the height of the group’s success, Ice Cube embarked on a solo career that garnered over 10 million solo albums sold. His hits include “Straight Outta Compton,” “It Was a Good Day” and “Check Yo Self.”

Ice Cube concert tickets are currently on sale at Ticketmaster.com. As reported here last month, multi-platinum rock/pop band Train was announced as the kickoff to the concert series this year.