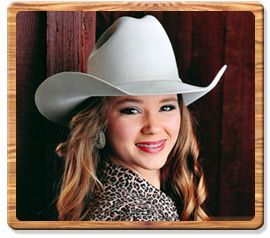 Lorna Job, of Sonora, is a junior at Summerville Connections Academy. After she graduates she plans to study equine Veterinary Medicine at UC Davis. Lorna was born and raised in Tuolumne County and has been riding horses since she could walk. She was the youngest competitor for the round up Queen title this year and this was the first year she was old enough to qualify.

Lorna graduated Sierra Waldorf School with a 4.3 GPA. Her favorite activities include competitive rock climbing, softball, acting, singing, playing the piano, and many horse related activities. Furthermore she has won numerous awards in competitive rock climbing, performed in 13 plays, played piano in the Sonora Bach Festival and completed two piano levels of the Merit Guild. She was the Mother Lode Fair Green Horse All Around Champion in 2008 and a member of the 2012-13 Academic Decathlon.

Lorna says, “Many of my friends and mentors have been past queens in the Mother Lode on up to Miss Rodeo California. I have dreamed of being a rodeo queen growing up and I have been watching and waiting for my turn to take a shot at representing the Mother Lode.”

Congratulations Lorna! A busy year as Mother Lode Round Up Queen will be one that you never forget.