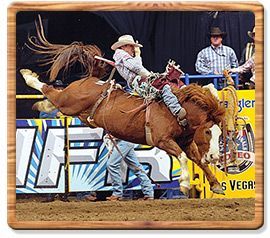 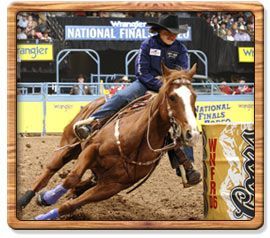 Barrel racing, the only official rodeo event for women regularly scheduled at PRCA sanctioned rodeos, pits the rider and horse against the clock. The origin of barrel racing is unsure. It became popular with ranch women and prompted a charter group of 74 members to form the Women’s Professional Rodeo Association, which is now affiliated with the PRCA. The rider must complete a cloverleaf pattern with three barrels placed approximately one hundred feet apart. Any other pattern will disqualify the rider, and there is a 5-second penalty for every barrel that is knocked over. Each contestant begins at the starting line and completes a full circle around all three barrels. After turning the third barrel, the horse races to the finish line and the official time is taken. The barrel racers often wear very colorful western outfits, sometimes coordinated with matching leg wraps on their horses. They add a great deal of excitement and pageantry to any rodeo. 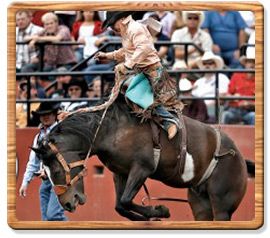 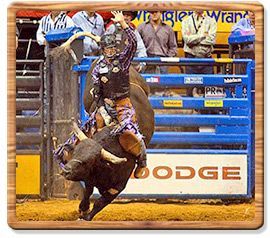 Most rodeo events originated on the ranches and cattle drives of the Old West. Roping cattle and riding broncs in competition were natural extensions of ranch work. Climbing aboard a bull, however, was not.

Many people, in fact, view attempting to ride a surprisingly agile and powerful 2,000-pound bull as a concept that is not totally sane. But those who make their living riding bulls swear by the lifestyle.

“This is it for me. It’s all I ever wanted to do,” said three-time world champion bull rider Tuff Hedeman.

The bull rider holds a flat-braided rope during his eight-second ride. In preparation for the ride, he pulls the tail of the rope through a loop, then wraps the rope around his fingers to secure his grip. He nods his head as a signal for the chute gate to be opened and the ride to begin. Each bull has a unique style of bucking. Many bulls spin, or continuously circle in one area of the arena. Others add a jump or kick to their spin, making them more difficult to ride. Still others jump or lunge forward in an attempt to rid themselves of a rider. The cowboy’s control during the ride and the bull’s bucking efforts each account for half of the rider’s score. 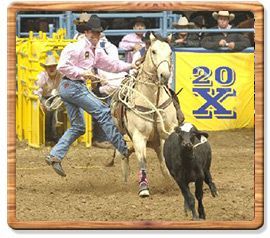 Calf roping, more than any other event in professional rodeo, has roots dating back to the Old West.When a calf was sick or injured, it had to be caught and immobilized quickly for treatment. Ranch hands prided themselves on how fast they could rope and tie calves, and soon they began informal contests. Being quick and accurate with a lasso aren’t the only requirements in calf roping. A successful roper also must be an experienced horseman and a fast sprinter. After giving the calf a pre designated head start, the horse and rider give chase. As the cowboy throws his loop, the horse comes to a stop. After catching the calf, the cowboy dismounts, runs to the calf, throws it to the ground by hand (called “flanking”) and ties any three legs together using a “pigging string” he has carried in his teeth throughout the run. While the contestant is accomplishing all this, the horse must keep slack out of the rope, but not pull it tight enough to drag the calf. If the calf is not standing when the roper reaches it, the cowboy must allow the calf to stand and then flank it before making the tie.

When the roper has completed his tie, he throws his hand in the air as a signal to the flag judge. He then remounts his horse and rides toward the calf, making the rope slack. The calf must remain tied for six seconds after the rope is slack or the cowboy will receive a “no time”. 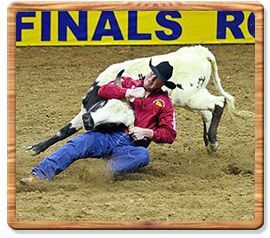 Speed is the name of the game in steer wrestling. With its modern world record sitting at 2.4 seconds, steer wrestling is the quickest event in rodeo. As with calf ropers and team ropers, the bulldogger starts on horseback in a box. A breakaway rope barrier is attached to the steer, then stretched across the open end of the box. The steer gets a head start that is determined by the size of the arena. When the steer reaches the advantage point, the barrier is released and the bulldogger takes off in pursuit. If the bulldogger breaks the barrier before the steer reaches its head start, a 10-second penalty is assessed.

In addition to strength, timing and balance are skills cultivated by the successful steer wrestler. When the cowboy reaches the steer, he slides down the right side of his galloping horse, hooks his right arm around the steer’s right horn, grasps the left horn with his left hand and, using strength and leverage, wrestles the animal to the ground. His work isn’t complete until all four of the animal’s feet face upward. But that’s still not all there is to it. In order to catch up to the running steer, the cowboy uses a “hazer,” another mounted cowboy who gallops his horse along the right side of the steer, keeping it from veering away from the bulldogger. 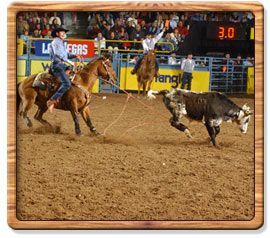 Team roping, requires close cooperation between two highly skilled ropers, a header and a heeler. The event originated on ranches when cowboys needed to treat or brand large steers and the task proved too difficult for one man.

The key to success? Hard work and endless practice. The partners must perfect their timing, both as a team and with their horses. As in calf roping or steer wrestling, the team ropers start from the boxes on each side of the chute from which the steer enters the arena. The steer gets a head start determined by the length of the arena. One end of a breakaway barrier is attached to the steer then stretched across the open end of the header’s box. When the steer reaches its advantage point, the barrier is released and the header takes off in pursuit, with the heeler trailing slightly further behind. If the header breaks the barrier before the steer completes its head start, the ropers are assessed a 10-second penalty. The header ropes first and must make one of three legal catches on the steer – around both horns, around one horn and the head, or round the neck. Any other catch by the header is considered illegal and the team is disqualified. After the header makes his catch, he turns the steer to the left and exposes the steer’s hind legs to the heeler. The heeler then attempts to rope both hind legs. If he catches only one foot, the team is assessed a five-second penalty. After the cowboys catch the steer, the clock is stopped when there is no slack in their ropes and their horses face one an other.