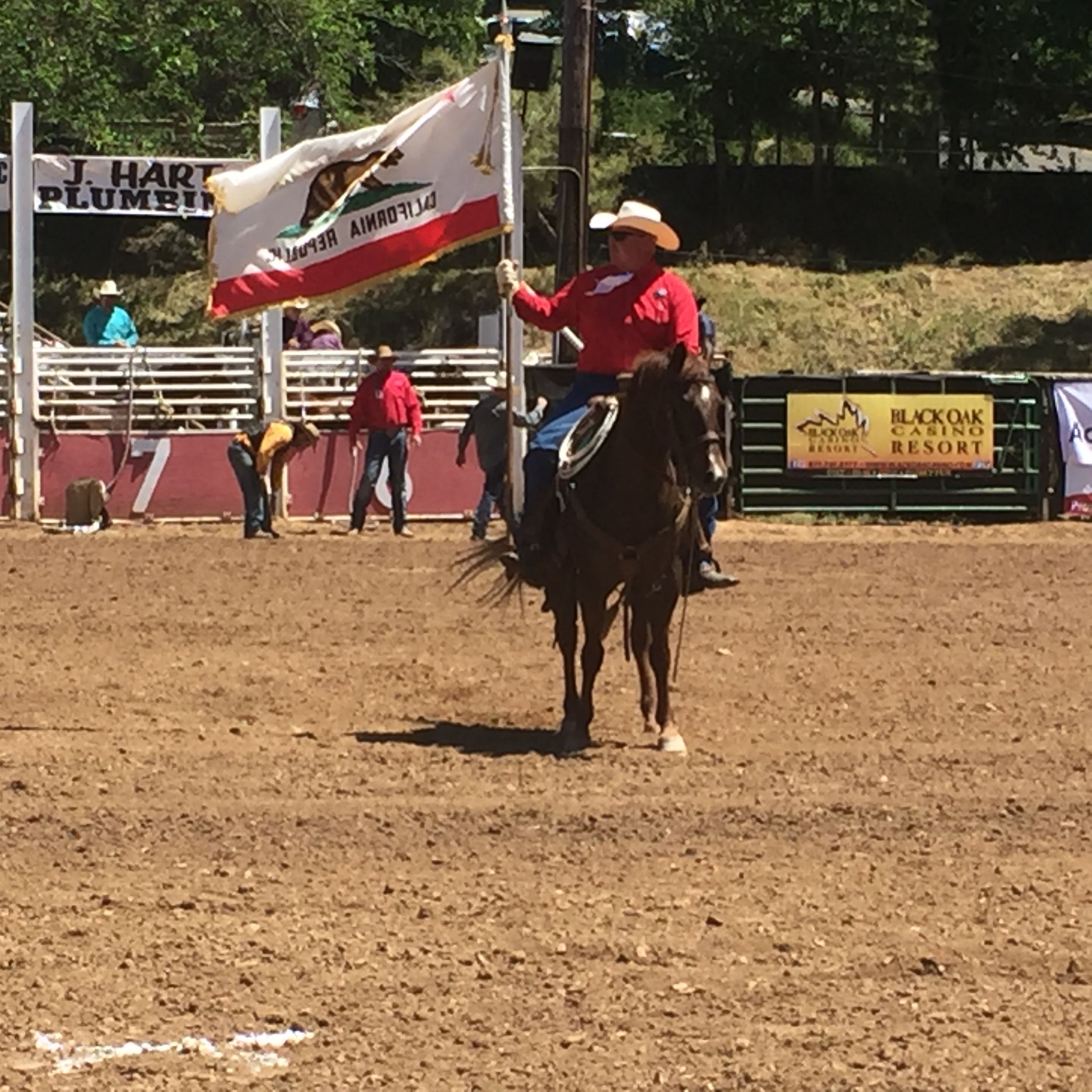 Roundups have been a part of Tuolumne County’s history since 1850. In fact, they were required under a California State Law enacted in 1851.

Early roundups, however, were not for public amusement. They were a necessary part of ranching on open range. To a lonely cattleman, they meant an opportunity to visit with friends and neighbors. Cattle had to be gathered and branded each year. Inevitably, after all the hard work of the roundup was finished, an afternoon of eating, drinking, gambling and horse racing followed. With the advent of cheap, practical fencing, like barbed wire, came the extinction of the annual working roundup. The first annual Sonora Rodeo was held May 5-6, 1916 at the high school baseball field. It consisted of fourteen events. The 1919 rodeo, as well as several others, was filmed by a Hollywood cameraman. Regardless, the rodeos suffered financially in the years to come. Due to the war efforts, a decline in good rodeo stock, and “fake” performers, attendance fell dramatically. Each year, the Sonora Rodeo had a different director, adding to its financial difficulties.

The 1928 rodeo saw the arrival of an investor. Mrs. Jonathan J. Crooks of San Rafael, heiress to the J.J. Case farm equipment fortune, attended the rodeo and, only days later, contacted Martin Liljedahl, purchasing from him the 50-acre racetrack where the rodeos were held.

It was in 1938 that Sonora began the practice of decorating Washington Street prior to the parade and rodeo. In 1941 the rodeo chairman was V.W. “Bill” West. That year marked the end of an era in local rodeo history. A “kiddie parade” was added and the Days of Gold parade was led by “Montie Montana.” The final rodeo before World War II was led in 1942.

During World War II, from 1943-1945, no rodeos were held. In the post-World War II years, the rodeo became a part of the 29th District Agricultural Association. In 1946, through the fairs’ cooperation, two one-day rodeos were presented. The Eagles Lodge sponsored rodeos for the following two years.

The Sheriff’s Posse was applied for incorporation in August 1948 and obtained in October 1948.

In the early 1950′s the posse produced the “Days of Gold” parade for the merchants and the rodeo at the Mother Lode Fair. They were seen parading in San Francisco’s Saint Patrick’s Day Parade, In Oakland, in Modesto, in Reno and many other venues.

They were instrumental in putting on the “Swimbuck Rodeo” which generated the funds for the Sonora High School swimming pool.

In 1956 the second part of the dream and mission became a reality… the Posse began producing, in partnership with our local merchants, the Mother Lode Round-Up Parade (the idea of Bill West, Sr.) and the Mother Lode Round-Up Rodeo on Mother’s Day. (Prior to World War II the rodeo had always been held on Mother’s Day at the old racetrack provided by Mrs. Crooks) Today the parade has grown into the second largest parade in California (second only to the Rose Parade) and the Rodeo has become one of the finest PRCA spring rodeos in the west, attracting more than 350 professional rodeo cowboys and cowgirls. The Round-Up now boasts one of the best rodeo queen pageants in California, a charity Calcutta, a western dance, a Mother’s Day Breakfast, a Cowboy Gift Show, kiddie rodeo, and plenty of fun, sun and pranks by Coyote Sam. The Mother’s Day weekend draws more than 50,000 visitors and is a traditional homecoming and hometown reunion for Tuolumne County families.

Over the years the Posse has held its meeting in the Jamestown Community Hall, but in the late 80′s and early 90′s they acquired and built their present clubhouse on Rawhide Road. They moved in and began meeting in the new clubhouse in 1991. The clubhouse is now made available to youth groups and other organizations for social rooms. Come join us at the clubhouse for “The Great Steak Barbecue” every spring.

Today the Posse has an active membership of 40, plus dozens of past active, honorary and associate members. The Posse continues to parade in more than 10 cities throughout California and Nevada promoting the county. In addition the Posse has become a full community service organization providing volunteer labor and time year round. It provides scholarships for all of our county high schools, sponsors a Boy Scout troop and the Wildcat Wranglers, participates in Sober Graduation, has produced the Cancer Society’s Jail & Bail, helped the Visitor’s Bureau with the Wild West Film Festival, provides and delivers Christmas toys for disadvantaged families, donates many, many dollars to youths and other charitable causes. And of course it still produces the county’s biggest event… the Mother Lode Round-Up Parade and Rodeo!

Have fun and Happy Mother’s Day!