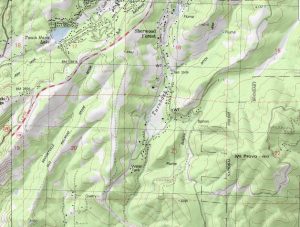 Sonora, CA –- A series of loud explosions that several residents called into Clarke Broadcasting over the past two days led us to query local authorities for possible answers.

Tuolumne County sheriff’s officials share they were not aware of any reported sounds or complaints. Over the years they have heard and sometimes came up with causes, such as kids exploding dry ice bombs, as reported here.

One caller from Twain Harte on Thursday described a series of extremely loud blasts that went on for about nine minutes in the noon hour, followed by another bout of explosions. He said although it was difficult to determine where the sounds could have been coming from, it was somewhere in the general vicinity of the ridgeline and Mt. Provo.

Stanislaus National Forest spokesperson Diana Fredlund checked with her law enforcement and firefighting colleagues to confirm that any explosive activities on Forest lands were not their agency’s doing.

However, she notes that the one Twain Harte caller’s description of the location could be a clue. “It is a place in the general area where people often go to shoot explosive materials that they are not allowed to do — but there’s no one to see them do it.”

She adds, “That is the only thing we could think of…so at this point, we do not have any knowledge of what it might [definitely] be.”