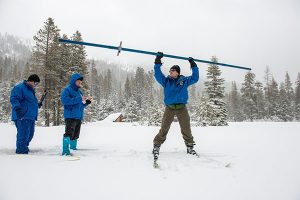 Sonora, CA – After a promising beginning in December, California’s weather turned mostly dry in January, leaving the water content of the Sierra Nevada snowpack below average for this time of year.

Department of Water Resources (DWR) spokesperson Sean de Guzman says the February manual snow survey at the Phillips Station, south of Lake Tahoe, showed, “A snow depth of 40.5 inches and 14.5 inches of water content. That amounts to 79% of the February average and 58% of the April 1 average this station.”

Statewide, DWR officials relay that the amount of water contained in the snowpack amounted to 72% of the Jan. 30 average. At this time last month, the statewide snow water content was 90% of the average, for the date, as reported here. De Guzman remains positive, “We still need to wait and see what the next few months will bring us.” He adds, “Luckily, our reservoirs statewide are either at or above their historical averages for this time of year thanks in part to just how wet of a water year 2019 was as well as optimized reservoir operations.” See the current reservoir level below:

The turnabout from the past two months was reflected in an abrupt increase in the scale of “abnormally dry” conditions, according to a weekly assessment by the U.S. Drought Monitor. The most recent data showed more than 34 percent of California is abnormally dry, up from less than 4 percent a week earlier. The increase is attributed to little or no precipitation falling in Southern California to southern Nevada, as shown in the map below:

The monitor has given an “abnormally dry” conditions designation from the Central Valley and stretching through northern California and into the Reno area of Nevada. Before this newest data that designation ran along a small area of the California-Oregon border.

The DWR measures the snowpack manually and electronically at more than 260 locations across California.