A Good Start For The Snowpack 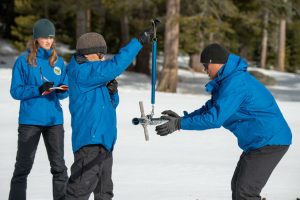 Sonora, CA — Despite a slow start, December storms gave California a promising start as revealed by the first snowpack survey conducted today at the Phillips Station near South Lake Tahoe.

Statewide, the snow water content known as the amount of water contained in the snowpack was 9.3 inches or 90% of the Jan. 2 average, according to the Department of Water Resources (DWR).

Pictures in the image box show DWR officials at the Phillips Station south of Lake Tahoe, conducting the manual reading. It found a snow depth of 33.5 inches and a water content of 11 inches. Sean de Guzman, the department’s chief of surveys and water supply forecasting relays, “That amounted to 97% of the January average and 44% of the April 1 average there.

Noting that the current “water year” got off to a slow start with a dry October and early November but an average December, DWR Climatologist Michael Anderson adds, “Last year we were a little drier than this but had an amazing February that pushed us into one of our larger snowpack’s” He continued, “Given that large variability, it’s difficult to say now where we’re at versus what the outlook will be when we get to April 1.”

Below are the current major state reservoir levels: