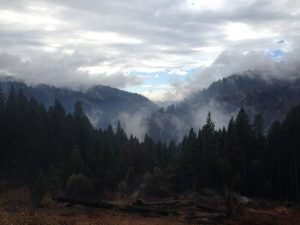 A modest Pacific storm will bring rain to the Central Valley and snow to the high elevations of the Sierra Nevada this weekend.

The heaviest precipitation is expected late tonight into Sunday morning.

A tenth of an inch to one inch of rain is likely in the Northern San Joaquin Valley. Rainfall totals in the Mother Lode this weekend will range from half-an-inch to one and three quarters of an inch.

Additionally, the National Weather Service has issued a Dense Fog Advisory for the Northern San Joaquin Valley, until 10 AM this morning.

Areas of dense fog have developed over portions of the Northern San Joaquin Valley. Motorists in the area should be prepared for longer travel times due to reduced visibility. Some areas of visibility are below one quarter of a mile in dense fog.

If you are driving and encounter fog, slow down, use your low beam headlights and leave plenty of distance ahead of you.