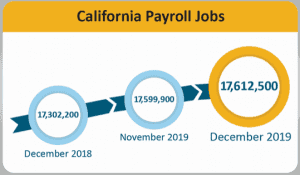 Locally, Tuolumne County also came in at 3.9 percent in December with 850 out of its total 21,600 labor force unemployed. In the November report, as reported here, its unemployment rate was at 3.7 percent. Calaveras County performed slightly better in December with 3.5 percent or 740 jobless out of a 21,500-person labor force, the previous month’s unemployment rate was 3.3 percent.

San Mateo and San Francisco counties had the state’s lowest unemployment rates for December, respectively at 1.8 and 1.9 percent. Imperial and Colusa counties, well into the double digits, reported the state’s highest figures for the unemployed, coming in at 19.4 and 14.2 percent, respectively.

Even with lower incoming and increasing outgoing population numbers reported in recent years, the agency still maintains the number of unemployed Californians remains the lowest since 1989 due to earlier larger population gains. The nation’s unemployment rate also remained unchanged in December, holding at 3.5 percent.

On the job loss side, the information sector reversed course from leading gains in November, losing 39,000 in December, reported to be as mostly in the motion picture and sound recording sub-sector. Experts express a mix of optimism and concern about the state’s labor picture moving forward into 2020.