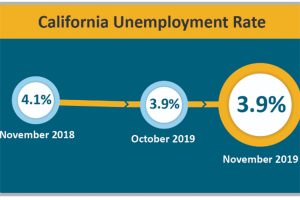 Sonora, CA — California’s unemployment rate maintained its record low of 3.9 percent in November as reflected in the figures released today by the California Employment Development Department (EDD) from two surveys.

The job gains last month contributed to a record job expansion in California of 117 months, surpassing the long expansion of the 1960s and the lowest since 1989 despite large gains in statewide population since then, according to the EDD.

The Mother Lode did not follow the state’s trend as there was a slight uptick in the numbers. Tuolumne County’s inched to 3.7 from 3.6 percent last month up with 810 out of the 21,720-workforce unemployed. Calaveras County also rose from 3.2 in October to 3.3 percent in November, leaving 710 out of the county’s workforce of 21,480 without a job.

San Mateo County had the lowest rate, which held steady at 1.8 percent. The highest unemployment in the state was Imperial County at 20.6 percent and is a dip from 21.2 percent in October.